Hearst Television (Hearst Stations Inc.)
WTAE-TV, virtual channel 4 (UHF digital channel 27), is an ABC-affiliated television station licensed to Pittsburgh, Pennsylvania, United States. It has been owned by the Hearst Television subsidiary of Hearst Communications since the station's inception, making this one of two stations that have been built and signed on by Hearst (the other being WBAL-TV in Baltimore). WTAE's studios are located on Ardmore Boulevard (PA 8) in the suburb of Wilkinsburg (though with a Pittsburgh mailing address), and its transmitter is located in Buena Vista, Pennsylvania. On cable, WTAE is carried on Comcast Xfinity channel 8 (channel 6 in Bethel Park, channel 5 in Monroeville, channel 3 in Greensburg, and channel 4 in some outlying areas) and Verizon FiOS channel 4.

WTAE-TV began broadcasting on September 14, 1958; the station has been Pittsburgh's ABC affiliate since its sign-on. From the beginning, the Hearst Corporation has been involved in the station's ownership. How the station came to be was the result of a long and complicated drama surrounding the awarding of the station's construction permit and ultimate broadcast license.

Although it was the sixth-largest market in the country for most of the early television era, Pittsburgh had only one major commercial television station for close to a decade—DuMont-owned WDTV (channel 2, now KDKA-TV), which signed on in 1949 and carried programs from all four television networks (DuMont, ABC, NBC and CBS). Further development of stations in Pittsburgh was halted by the Federal Communications Commission (FCC)'s freeze on license awards, which ran from 1948 until 1952. Even after the freeze was lifted by the FCC's Sixth Report and Order, the FCC held off on allocating new VHF stations to Pittsburgh in order to give the smaller cities in the Upper Ohio Valley a chance to get on the air. The cities in the Upper Ohio Valley are close enough together that they must share the VHF band.

Several months after the freeze was lifted two UHF stations in Pittsburgh, WENS-TV (channel 16, now WINP-TV) and WKJF-TV (channel 53, now WPGH-TV), went on the air. For reasons that were both technical and financial, both stations were short-lived. Meanwhile, revisions to the VHF allocation table had given the Pittsburgh area three additional channels—4, 11, and 13, the latter reserved for non-commercial educational purposes. The channel 4 frequency on which WTAE-TV began operations during the analog television era was originally allocated to suburban McKeesport, in Allegheny County; other official documents have listed the community of license as Irwin, in Westmoreland County.

Hearings on the channel 4 permit opened in 1955, and it was originally granted by the FCC to the owners of KQV radio in 1956. Hearst, which entered Pittsburgh broadcasting when it purchased WCAE radio (1250 AM, later WTAE [AM] and now WPGP) in 1931, and the other three applicants that lost later petitioned the FCC to re-open the permit hearings following the death of KQV co-owner Irwin D. Wolf. The subsequent reconsideration awarded channel 4 to Hearst. The agency's commissioners were divided on how to break the stalemate to the satisfaction of both winning parties, and suggested a merger between Hearst and the KQV group, who sold their radio station to ABC in order to appease FCC cross-ownership restrictions. Together, both firms became equal partners in Television City, Inc., under which ownership WTAE-TV went on the air. Hearst would purchase the remaining 50 percent of the station in 1962. As such, WTAE-TV is the only Pittsburgh television station affiliated with a major network to have not changed ownership.

Shortly before the station signed on, the FCC moved the channel 4 assignment to Pittsburgh proper following several years of petitioning by then-Pittsburgh mayor (and future Governor of Pennsylvania) David L. Lawrence. However, the FCC had recently changed its rules so that channel 4 could have based its main studio in Pittsburgh, even if it had been licensed in McKeesport or Irwin. The station's original ownership group's connections with powerful U.S. Senator from Florida, George Smathers led to televised U.S. House hearings with both Lawrence and Smathers testifying in 1958. Both were eventually exonerated with Governor Lawrence claiming that in fact it was the city's solicitors office (whose director he appointed) which may have been guilty of any improper influence, with Smathers and Lawrence merely fulfilling their duty to their respective constituents. WTAE-TV was thus short-spaced to other channel 4 stations in Columbus, Ohio; Oak Hill, West Virginia; Buffalo, New York; and Washington, D.C.; the transmitter was located southeast of the city as a result of the move. Shortly after signing on, WTAE-TV was briefly affiliated with the NTA Film Network, sharing the affiliation with KDKA-TV, WIIC-TV (now WPXI), and WQED.

In the early years, Channel 4 was best known in the market for its locally originated entertainment programming, including popular early program late night movie show Shock Theatre, which was hosted by former Pittsburgh radio disc jockey Bob Drews, who portrayed Sir Rodger (often misspelled as Sir Roger). Shock Theatre featured monster movies such as The Invisible Man and Frankenstein in-between live-action comedic skits. By the 1970s, WTAE-TV was running a mix of cartoons and sitcoms from 6:30 to 9 a.m., a local talk show, some ABC shows, more cartoons and off-network sitcoms in the afternoon, news and some first run shows in the evening, and ABC prime time programming.

WTAE-TV first adopted the "Circle 4" logo in 1973, eventually adopting the current version in 1995. Due to the design and similar callsigns, the logo has received comparisons to fellow ABC affiliate WATE-TV in Knoxville, Tennessee, who has used the "Circle 6" logo since 2011. Aside from the ABC affiliation, the two stations are not related. In 2012, the "Circle 4" logo surpassed KDKA-TV's Group W-era logo that in various forms was used from 1965-2003 for the longest-used station logo on Pittsburgh television.

On April 24, 1980, WTAE-TV personality Nick Perry, who hosted Bowling for Dollars and also called the lottery drawings for the Pennsylvania Lottery, fixed the Lottery's daily numbers drawing so that the it would come up as "6-6-6". Perry served jail time, and the drawings were moved to WHP-TV in Harrisburg a year later. This resulted in lotteries now being audited and monitored with "witnesses" from the government and/or accounting firms, and also inspired the movie Lucky Numbers. KDKA-TV aired the Lottery drawings in the Pittsburgh market after this incident until 2009, when they moved back to WTAE-TV.

In April 1985, WTAE-TV became the only station in the United States to transmit the World Wrestling Federation's WrestleMania event free over-the-air, after a technical glitch prematurely ended the event's closed-circuit broadcast from the Civic Arena.

In early 2001, Hearst bought Clarksburg, West Virginia-based NBC affiliate WBOY-TV, which has a significant signal overlap with WTAE-TV (a year earlier, the FCC began to allow companies to own television stations with overlapping coverage areas). However, Hearst decided to sell WBOY-TV to West Virginia Media Holdings in September of that year after less than a year of ownership.

In June 2011, a WTAE-TV staff photographer was charged with a sexual crime when an alleged victim stated that the photographer had inappropriate physical contact with her. The photographer arrived in a WTAE-TV news vehicle with station equipment and claimed he was doing an interview, although WTAE-TV management claims that he was not on duty at the time—even though he was using station resources. 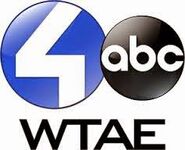