Public TV for the Upper Peninsula of Michigan and Northern Wisconsin

WNMU serves all communities in the UP, over the air on channel 13 in the central UP, and on cable regionwide, including portions of northern Wisconsin not served by Wisconsin Public Television stations WPNE-TV or WLEF-TV.

It is also seen on Charter cable in Sault Ste. Marie, Michigan, instead of WCMU-TV, which the rest of its market get via transmitters throughout the Northern Lower Peninsula of Michigan. In most of the Eastern UP, cable or satellite are required to receive any PBS service; when the digital conversion took place in 2009, the Eastern UP lost terrestrial PBS service when WCMU satellite WCML in Alpena lowered its transmitter power for its digital broadcasts. Neither WCMU nor WNMU currently have plans to expand into the Eastern UP to fill the void left by the departure of WCML from the Eastern UP airwaves.

WNMU was part of the Shaw line-up on its Sault Ste. Marie, Ontario, system until 2002, when it was replaced with Detroit's WTVS.

The transmitter for WNMU-TV is located just outside Ishpeming in Ely Township. The antenna is 1,000 feet (300 m) tall.

The future of WNMU radio and TV was threatened in recent years, as budget cuts led to a proposed sale or closure of the stations. However, new funding was approved, keeping the station on the air. 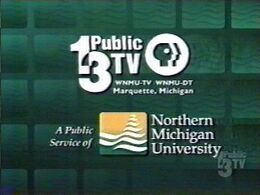 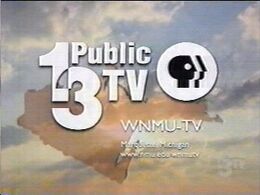 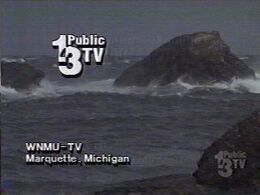 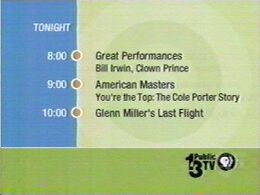 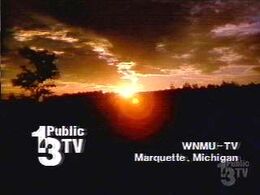 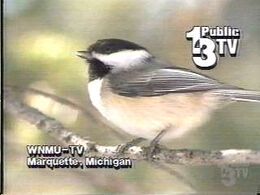 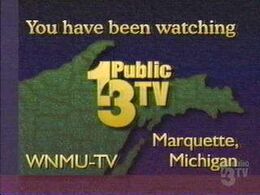 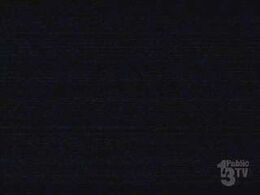 Screenbug (4/2003)
Add a photo to this gallery
Retrieved from "https://tvstations.fandom.com/wiki/WNMU?oldid=1736"
Community content is available under CC-BY-SA unless otherwise noted.