WKYC is an NBC-affiliated television station licensed to Cleveland, Ohio, United States. It broadcasts a high definition digital signal on UHF channel 17 (or virtual channel 3 via PSIP) from a transmitter in suburban Parma, Ohio. Owned by Tegna Inc., WKYC maintains studios on Tom Beres Way (a section of Lakeside Avenue in Downtown Cleveland named after the station's longtime political reporter who retired in 2016).

The station first signed on the air on October 31, 1948 as WNBK, broadcasting on VHF channel 4. It was the second television station in Cleveland to debut, ten months after WEWS-TV (channel 5), and was the fourth of NBC's five original owned-and-operated stations to sign on, three weeks after WNBQ (now WMAQ-TV) in Chicago. WNBK was a sister station to WTAM radio (1100 AM), which was owned by NBC since 1930. Although there was no coaxial cable connection to New York City, AT&T had just installed a cable connection between WNBK, WNBQ, WSPD-TV (now WTVG) in Toledo, KSTP-TV in St. Paul, Minnesota and KSD-TV (now KSDK) in St. Louis, creating NBC's Midwest Network. WNBK became one of the originators of programming for the regional network, along with WNBQ. Two days after signing on, on November 2, WNBK transmitted its coverage of the Truman/Dewey election results to the NBC Midwest Network. On January 11, 1949, WNBK began carrying NBC's New York-originated programming live via a cable connection to Philadelphia.

As a result of frequency reallocations resulting from the Federal Communications Commission's 1952 Sixth Report and Order, WNBK was moved to channel 3, swapping frequencies with fellow NBC affiliate WLWC (now WCMH-TV) in Columbus in order to alleviate same-channel interference with another NBC station, WWJ-TV (now WDIV-TV) across Lake Erie in Detroit. After construction was completed on the station's new transmitter in Parma, the channel switch took place on April 25, 1954.

In May 1955, NBC agreed to trade WNBK and WTAM-AM-FM to Westinghouse Electric Corporation in return for KYW radio and WPTZ television in Philadelphia. Although Cleveland was a top-10 television and radio market at the time, NBC had long wanted to "trade up" its holdings to a larger market. Also, Philadelphia was the largest market in which it did not own a station. The swap became official on January 22, 1956, as NBC moved its operations (including much of its Cleveland staff) to Philadelphia, with WPTZ becoming WRCV-TV. Westinghouse took over the WNBK/WTAM operation and changed its call letters to KYW-AM-FM-TV on February 13, 1956. Westinghouse received a cross-station waiver from the FCC to own channel 3 since it has overlapping signals with Group W flagship KDKA-TV in Pittsburgh.

Under Westinghouse's ownership, KYW-TV launched Barnaby, a children's program which starred Linn Sheldon as the title character. The show premiered in 1956 and was an immediate hit, running on weekday afternoons for ten years. In 1961, channel 3 originated a local 90-minute weekday daytime variety talk show with former band singer Mike Douglas, which went up against WEWS' One O'Clock Club. Quickly eclipsing the competition, The Mike Douglas Show became so popular that Westinghouse decided to carry the program on its other stations in 1963, and eventually to syndicate the program nationwide.

Two NBC programs were notably excluded from KYW-TV's schedule: The Tonight Show, which was reformatted after original host Steve Allen's departure as the short-lived Tonight! America After Dark, was dropped by channel 3 in June 1957 and replaced with a late-night movie following the 11:00 p.m. newscast. NBC revived Tonight with Jack Paar as host in July of that year, but KYW-TV continued with its own programming, which also included the Westinghouse-produced-and-syndicated (new) Steve Allen, Regis Philbin, and Merv Griffin programs. The Paar-hosted Tonight Show would not be seen in Cleveland until October 1957, when NBC agreed to terms with WEWS to carry the program. KYW-TV also did not carry NBC's early-evening newscast, The Huntley-Brinkley Report, for exactly one year comprising the 1959-1960 television season. Like with the Tonight Show, WEWS also ran this program. Also during this period, WFMJ-TV (channel 21) out of Youngstown was the nearest full-time NBC station to Cleveland. Many were able to receive WFMJ with a good antenna and UHF converter at that time.

Despite its success in Cleveland, Westinghouse was not happy with how the 1956 trade with NBC played out. Almost as soon as the ink dried on the trade, the FCC and the U.S. Department of Justice launched an investigation, claiming NBC extorted and coerced them into agreeing to the deal. The investigators discovered that Group W had only agreed to the deal after NBC threatened to remove its affiliation from WPTZ (the present-day KYW-TV) and Westinghouse's other NBC affiliate, WBZ-TV in Boston, and to withhold a primary affiliation with newly purchased KDKA-TV, which ultimately affiliated with CBS despite its strong radio ties to NBC. In 1964, after an investigation that lasted eight years, the FCC ordered the swap to be reversed. NBC tried to appeal the decision, delaying the swap for one more year, but ultimately to no avail. Ironically, during the ordeal NBC was actually trying to sell its Philadelphia cluster it acquired from Westinghouse to RKO General in exchange for Boston cluster WNAC radio/TV; NBC wouldn't own a station in Boston until purchasing WBTS-LD in 2016.

NBC re-assumed control of the Cleveland stations on June 19, 1965. Instead of restoring the previous WNBK and WTAM identities, the stations' new call letters became WKYC-AM-FM-TV, mostly as a nod to Westinghouse's stewardship of the stations. The AM station, for instance, had become a top 40 powerhouse under the moniker "KY11." WKYC-TV was separated from its sister stations in 1972, when NBC sold the WKYC radio stations to Ohio Communications. The AM station changed its calls to WWWE before restoring its historic WTAM calls in 1996, while the FM station became WWWM and then, in 1982, WMJI.

In a reverse of what took place in 1956, some radio and television staffers who worked for Westinghouse in Cleveland moved to Philadelphia along with the KYW call letters. This included news reporter Tom Snyder, news director Al Primo, and Mike Douglas. WKYC-TV continued to air The Mike Douglas Show for many years after both the host and the program moved to Philadelphia, where it remained until 1978. Westinghouse also took the Eyewitness News name and format with it from Cleveland to Philadelphia; it would later return to Cleveland, being used on WEWS from 1972 to 1990. Other Westinghouse employees—such Linn Sheldon, Clay Conroy (who played Barnaby's sidekick "Woodrow the Woodsman" before getting a spinoff show of his own), and staff announcer Jay Miltner (who had been with the station since its inception in 1948)—remained in Cleveland. To this day, the Philadelphia stations insist they "moved" to Cleveland in 1956 and "returned" to Philadelphia in 1965 after the trade was voided.

With the Cleveland Browns' move to the newly-formed American Football Conference after the completion of the AFL-NFL merger of 1970, channel 3, by way of NBC's rights to carry the AFC games, became the station of record for the team. This partnership would continue through 1995. Since 2006, Browns games are shown on channel 3 when the team plays on NBC's Sunday Night Football. NBC also relocated many of their top Philadelphia radio and television executives and some on-air personalities to Cleveland, such as meteorologist Wally Kinnan. Kinnan's arrival displaced Dick Goddard, who had been with channel 3 since 1961. Goddard moved to Philadelphia with Westinghouse but returned to Cleveland in early 1966 and joined WJW-TV (channel 8). Evening sports anchor Jim Graner, who had joined the station in 1957 while also serving as the color commentator for the Cleveland Browns radio network, remained through the transition; he stayed on until his death in 1976. One show that made the jump to Cleveland was the award-winning documentary series Montage, produced and directed by Dennis Goulden. This nationally acclaimed series of over 250 episodes investigated the issues and lifestyles of the Cleveland community during the 1960s and 1970s. The Tonight Show also returned to WKYC-TV's schedule in February 1966, after airing on WEWS during channel 3's Westinghouse years. At the same time, channel 3 enjoyed several technical advances with NBC's parent company, RCA (and after 1986, General Electric). It was Cleveland's first television station to broadcast full-time in color on September 13, 1965 (almost immediately after NBC regained channel 3 from Group W), the first to broadcast in stereo in 1985, and the first VHF station to closed caption its local newscasts for the hearing-impaired in 1990.

NBC cedes control to Multimedia, and then GannettEdit

After years of sagging ratings and continuing to be the lowest-rated of the network's owned and operated stations, NBC sold majority control of WKYC (51%) to Multimedia, Inc. in 1990.[21] Due to its long ownership by NBC, to this day channel 3 is the only major station in Cleveland to have never changed its primary affiliation. At that time, Multimedia's entertainment division (now part of NBC's syndication arm) produced a number of syndicated daytime talk shows, and as a result Multimedia productions such as Jerry Springer (who himself had come from then-sister station WLWT in Cincinnati), Sally Jessy Raphael and Donahue ended up on WKYC's daily schedule. In 1993, the NBC peacock was dropped from the primary station logo, which italicized the numeral 3, was put in a square, and took a red-white-blue color scheme, though WKYC was still (and continues to be to this day) identified as "Channel 3" (the previous logo was a plain Helvetica "3" [also used 1976-84], and was modified to become the logo today, after replacing the logo used 1984–91, an abstract, rectangular 3).

The Gannett Company purchased Multimedia in November 1995, and acquired the remaining 49% of the station from NBC in early 1999. WKYC accomplished another first in Cleveland television history by becoming the first station in Northeast Ohio to broadcast in high-definition in 1999. Soon after Gannett bought full control of the station, it moved from its longtime studios in the former East Ohio Gas building on East Sixth Street in downtown Cleveland to its state-of-the-art Lakeside Avenue studio on the shores of Lake Erie, which Channel 3 refers to as its "digital broadcast center".

On July 1, 2011, WKYC became Cleveland's television outlet for the Ohio Lottery's daily drawings, as well as its Saturday night game show Cash Explosion; the rights returned to the lottery's former longtime broadcaster WEWS-TV (which had carried the drawings from the early 1970s until WKYC assumed the rights) on July 1, 2013.

Around the first week of October 2012, Gannett entered a dispute against Dish Network regarding compensation fees and Dish's AutoHop commercial-skip feature on its Hopper digital video recorders. Gannett ordered that Dish discontinue AutoHop on the account that it is affecting advertising revenues for WKYC. Gannett threatened to pull WKYC from Dish in Cleveland should the skirmish continue beyond October 7 and Dish and Gannett fail to reach an agreement. The two parties eventually reached an agreement after extending the deadline for a few hours.

In March 2013, the station made national headlines when it pre-empted NBC's Thursday night sitcom lineup for two weeks with Matlock telefilms. Coming so shortly after it was announced about NBC's then sagging ratings, the decision was perceived to be a result of the lineup's poor performance, though WKYC's manager reminded many who had not noticed that the station has typically preempted the lineup for Matlock telefilms quite often for the past ten years (usually to provide "make good" ad slots for local advertisers whose pre-scheduled inventory was pre-empted by breaking news or sports coverage), and the move had nothing to do with ratings. 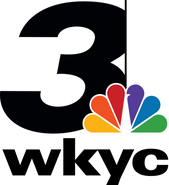 Add a photo to this gallery
Retrieved from "https://tvstations.fandom.com/wiki/WKYC?oldid=11147"
Community content is available under CC-BY-SA unless otherwise noted.