On cable, the station is available on Comcast Xfinity channel 27 in Washington, D.C. (NBCSN is carried on cable channel 7) and channel 7 in the Maryland and Virginia suburbs, and on Cox Communications, RCN and Verizon FiOS channel 7.

The District of Columbia's third television station began broadcasting on October 3, 1947 as WTVW, owned by the Washington Star, along with WMAL radio (630 AM and 107.3 FM, now WRQX). It was the first high-band VHF television station (channels 7-13) in the United States. A few months later, the station changed its call letters to WMAL-TV after its radio sisters. WMAL radio had been an affiliate of the NBC Blue Network since 1933, and remained with the network after it was spun off by NBC and evolved into ABC. However, channel 7 started as a CBS station since ABC had not yet established its television network. When ABC launched on television in 1948, WMAL-TV became ABC's third primary affiliate; the station continued to carry some CBS programming until WOIC (channel 9, now WUSA) signed on in 1949. During the late 1950s, the station was also briefly affiliated with the NTA Film Network. (Note: The WTVW call letters were later picked up by what is now WISN-TV, the ABC affiliate in Milwaukee, Wisconsin, when it signed on in 1954. Today, the callsign resides in Evansville, Indiana on a CW-affiliated station that is also on channel 7.)

In 1975, Houston businessman Joe Allbritton, the owner of Washington-based Riggs Bank, purchased a controlling interest in the Star's media properties, which by that time also included WLVA radio and WLVA-TV (now WSET-TV) in Lynchburg, Virginia; and WCIV in Charleston, South Carolina. As a condition of the purchase, Allbritton was given three years to break up the Washington newspaper/broadcast combination, which the Federal Communications Commission (FCC) was seeking to prohibit under the tightening of its concentration of media ownership policy. WMAL-TV was separated first from its radio sisters when ABC purchased WMAL-AM-FM in March 1977. Upon the radio transfer, channel 7, per FCC regulations at the time that forbade TV and radio stations in the same market, but with different ownership groups from sharing the same call letters, changed theirs to the current WJLA-TV, after the owner's initials. In April 1977, Allbritton negotiated a deal to trade the station to Combined Communications Corporation in return for KOCO-TV in Oklahoma City, but called off the deal due to last-minute complications despite receiving FCC approval. Allbritton instead sold the Washington Star to Time Inc. in January 1978, and retained WJLA-TV and the Lynchburg and Charleston television stations for what would eventually become Allbritton Communications.

Rumors abounded from the mid-1990s onward that ABC might buy WJLA-TV, effectively reuniting it with its former radio sisters. Indeed, in the summer of 1998, ABC's corporate parent the Walt Disney Company discussed a possible acquisition of Allbritton Communications, but a sale agreement failed to materialize. ABC eventually sold most of its radio properties, including WMAL and WRQX, to Citadel Broadcasting Corporation in June 2007. Even so, WJLA remained an ABC affiliate under Allbritton's ownership because the company had an exclusive affiliation deal with the network. After WJZ-TV in Baltimore switched to CBS in 1995, WJLA became ABC's longest-tenured television affiliate.

In December 2007, WJLA began simulcasting WTOP-FM on its "Weather Now" digital sub-channel; this continued through late July 2009. Until July 28, 2008, WJLA-TV offered Local Point TV on 7.2, which was a local version of Current, featuring five-minute video segments created by area residents. Abby Fenton, the station's Director of Community Relations said in an interview with Broadcasting & Cable media industry magazine that "the station likes the "Local Point" programming and is pondering where else it might fit". Retro Television Network ("Retro TV"), a new syndicated digital national broadcast network with older re-runs of classic television series from the 1950s, 1960s, and 1970s replaced Local Point TV at 10:00 a.m. on July 28, 2008.

In late October 2008, WJLA began simulcasting on local low-powered station WWTD-LP; the station continued to broadcast an analog feed of WJLA after the digital transition. In late July 2009, WJLA dropped its locally produced "WeatherNow" channel for The Local AccuWeather Channel on its DT2 subchannel under the "Doug Hill's WeatherNow" brand. On March 13, 2012, WJLA dropped the Local AccuWeather Channel in favor of forecasts from their own meteorologists. With that, the name of the channel was slightly changed to "ABC7's WeatherNow". WJLA began carrying "MeTV", a competing syndicated digital broadcast TV network with older classic and re-runs of television series on March 2013 on WJLA's digital subchannel 7.2, replacing "ABC7's WeatherNow" on Channel 7.2.

WJLA-TV stopped transmitting on its analog signal, over VHF channel 7, on June 12, 2009, the official date in which full-power television stations in the United States transitioned from analog to digital broadcasts under federal mandate. The station's digital signal relocated from its pre-transition UHF channel 39 to VHF channel 7 for post-transition operations. While 90% of the station's viewers received WJLA's signal via cable or satellite, many of the over-the-air viewers had problems after the final transition. Some needed to rescan, and others needed a VHF antenna. WJLA applied on August 29, 2009 for special authorization by the FCC to increase its effective radiated power (ERP) to 52 kW. The power increase was put into effect on September 18, 2009. WJLA already ran 30 kW of ERP, which was higher than the other three VHF stations in the area: WUSA (12.6 kW), WBAL-TV (5 kW), and WJZ-TV (28.8 kW) (post transition power levels).

On May 1, 2013, reports surfaced that Allbritton was planning to sell its television stations so it could put more of its focus on running its political website Politico. Allbritton announced nearly three months later that it would sell all of its stations to Sinclair Broadcast Group for $985 million. After nearly a year of delays, the deal was approved by the FCC on July 24, 2014. The deal was finalized on August 1, 2014. The new ownership meant that WJLA by default became the Washington affiliate of Sinclair's American Sports Network which launched in the same month; however on the main signal, ABC's sports coverage from ESPN takes preference over ASN's lower-tier conference rights and it is generally carried over the station's 7.2 and 7.3 subchannels instead.

On May 8, 2017, Sinclair Broadcast Group entered into an agreement to acquire Tribune Media – owner of CW affiliate WDCW (channel 50) – for $3.9 billion, plus the assumption of $2.7 billion in debt held by Tribune. Had the acquisition received regulatory approval by the FCC and the U.S. Department of Justice's Antitrust Division, it would have resulted in the formation of a duopoly between WDCW and WJLA-TV (in addition to NewsChannel 8) as the market would have more than eight independent television station owners had channel 50 become a Sinclair property. However, on August 9, 2018, Tribune announced that it would terminate the Sinclair deal. 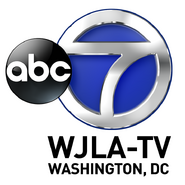