WISC-TV, virtual channel 3 (VHF digital channel 11), is a CBS-affiliated television station licensed to Madison, Wisconsin, United States. It is the flagship station of Madison-based Morgan Murphy Media, and has been affiliated with CBS since its launch on June 24, 1956. WISC-TV's studios are located on Raymond Road in Madison, and its transmitter is located on Mineral Point Road in the city's Middleton Junction section.

WISC-TV also carries a secondary subchannel branded as TVW, which carries an affiliation with MyNetworkTV, along with additional syndicated and locally originated programming.

WISC-TV first took to the airwaves on June 24, 1956, taking over Madison's CBS affiliation from WKOW-TV (which retained ABC affiliation). It was originally a sister station to WISC radio (1480 AM, now WOZN at AM 1670).

Despite being the state's second largest market, Madison was a "doughnut" market as it was sandwiched between other markets where primary VHF signals were already assigned–Milwaukee (channels 4, 6, 10, and 12) to the east, Wausau/Rhinelander (channels 7, 9, and 12) and Green Bay (channels 2, 5, and 11) to the north, Chicago (channels 2, 5, 7, 9, and 11) to the southeast, Rockford (channel 13) to the south, and La Crosse/Eau Claire (channels 8 and 13) to the west. Having the market's only VHF signal gave channel 3 a distinct advantage—and market leadership—over UHF competitors WKOW and WMTV, a position that the station has enjoyed for much of its history, even after the advent of cable television put the competitors on equal footing (WISC's former slogan, "Wisconsin's Leadership Station," played upon that advantage).

WISC-TV has been affiliated with CBS since its launch, though it was also briefly affiliated with the NTA Film Network during the late 1950s.[1] From 1995 to 1999, WISC-TV carried select UPN programming during overnight hours, before the launch of a full-time UPN affiliate in the market, WHPN. UPN returned in 2002 on WISC's cable/digital subchannel, TVW, which had been affiliated with The WB since 1998; TVW has been with MyNetworkTV since 2006.

WISC-TV commemorated its 50th anniversary in June 2006, which merited a congratulatory mention by David Letterman on his Late Show broadcast of June 22, 2006 (its first program, he quipped, was "Good Morning, Cheddar").

After CBS' airing of Super Bowl LIII, WISC-TV debuted a new newscast set, dropped the "3" logo in use since 1990, and changed their News 3 branding to News 3 Now.

In addition to its normal morning, noon, 5 p.m., 6 p.m. and 10 p.m. newscasts, WISC airs News 3 Now Live at Four, a one-hour newscast which is largely devoted to non-headline news and features that focus on the community and the people of Madison, Dane County, and south-central Wisconsin. Live at Four originally aired at 5 p.m., but moved to 4 p.m. in October 2015 to expand to one hour. In April 2011, WISC began offering free on demand segments of their newscasts on the Roku digital video player.[6] WISC-TV also produces a 9 p.m. newscast for Fox affiliate WMSN-TV, under a news share arrangement that began on January 1, 2012 (before then, WMSN had aired a newscast from WKOW since 1999, while WISC had produced a 9 p.m. newscast for TVW since 2004).[7]

On October 26, 2008, WISC-TV began producing all its newscasts in total high-definition video, becoming the first commercial TV station in Wisconsin to do so.[8] The station had produced occasional news features in HD since the beginning of 2008. 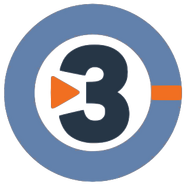