Nexstar Media Group (possible resale to another owner to be determined if Nexstar's purchase of Tribune Media is approved)
WHTM-TV, virtual channel 27 (VHF digital channel 10), is an ABC-affiliated television station licensed to Harrisburg, Pennsylvania, United States and serving the Susquehanna Valley region (Harrisburg–Lancaster–Lebanon–York). The station is owned by Nexstar Media Group. WHTM-TV's studios are located on North 6th Street in Harrisburg (although with a Hoffman Street address) directly across the street from the studios of rival WHP-TV, and its transmitter is located on the ridge north of I-81 along the Cumberland and Perry county line. On cable, the station is available on Comcast Xfinity channel 9 and in high definition on digital channel 807, and is also available via Verizon FiOS, DirecTV and Dish Network.

The station first signed on the air on June 19, 1953 as WTPA (standing for Television PennsylvaniA), operating as an NBC affiliate. WTPA was founded by the Newhouse family, whose media holdings eventually became Advance Publications, and was operated alongside Harrisburg's two major newspapers, The Patriot and The Evening News (since merged as The Patriot-News). The following year, it switched affiliations to ABC. It originally operated on UHF channel 71, but later moved to channel 27 in 1957, after that channel's original occupant, WCMB-TV, ceased operations. During WTPA's first year on the air, the station broadcast from 9:00 a.m. to 12:15 a.m. on weekdays and from noon to midnight on weekends. Early local programs included a midday religious program Daily Devotions, music and comedy-focused variety program Mac's Matinee, daytime talk show Harrisburg Hostess, cooking show Look What's Cooking and Susquehanna Trail.

The Times Mirror Company acquired the Newhouse television stations (including WTPA) on March 28, 1980 and changed its call sign to the current WHTM-TV. The station was sold, along with then-sister station WETM-TV in Elmira, New York, to Smith Broadcasting Company in 1986. WHTM, in turn, was sold to Price Communications in 1994. Allbritton Communications acquired the station in 1996.

An ice storm that hit South Central Pennsylvania on December 15 and 16, 2007 knocked out the power to WHTM's transmitter site, which also affected the reception of the station on some cable and satellite providers. WHTM's signal began operating at full power once again on the morning of December 18.

Feature reporter Chuck Rhodes served as a minor cast member in the 2000 film Lucky Numbers, which was based loosely on the 1980 Pennsylvania Lottery scandal and starred John Travolta as a cash lacking meteorologist, whose biggest competition in Harrisburg was Rhodes (the real-life incident occurred in Pittsburgh).

Sale to Media General and then Nexstar=[]

On July 29, 2013, Allbritton announced that it would sell its seven television stations, including WHTM, to the Sinclair Broadcast Group. As part of the deal, Sinclair was planning to sell the license assets of its existing Harrisburg station, WHP-TV (channel 21) to Deerfield Media, but would still operate that station through shared services and joint sales agreements. However, the FCC ruled that Sinclair's plans to retain WHTM would have, in effect, created a new LMA between WHTM and WLYH-TV, even though the FCC had ruled in 1999 that such agreements made after November 5, 1996 covering more than 15% of the broadcast day would count toward the ownership limits for the brokering station's owner.

After several revisions to the deal—one which included a proposal to divest WHP and the LMA with WLYH, Sinclair chose to instead retain WHP and the LMA with WLYH, and divest WHTM. On June 23, it was announced that WHTM would be sold to Media General for $83.4 million. After nearly a year of delays, the deal was approved by the FCC on July 24, 2014. Sinclair completed the purchase of the Allbritton stations on August 1, with WHTM being operated under a "Hold Separate Agreement" until its sale to Media General was completed on September 2.

On January 27, 2016, Nexstar Broadcasting Group—which owned WLYH (now WXBU and owned by Howard Stirk Holdings) from 2006 to 2015—announced that it had reached an agreement to acquire Media General. Upon consummation, WHTM became a sister station to five stations in three other Pennsylvania markets, including WYOU and WBRE-TV in Scranton/Wilkes-Barre, WTAJ-TV in Altoona, and WJET-TV and WFXP in Erie. The sale was completed on January 17, 2017.

On December 3, 2018, Nexstar announced it would acquire the assets of Chicago-based Tribune Media—which has owned Fox affiliate WPMT (channel 43) since 1996—for $6.4 billion in cash and debt. Nexstar is precluded from acquiring WPMT directly or indirectly, as FCC regulations prohibit common ownership of two or more of the four highest-rated stations in the same media market. (Furthermore, any attempt by Nexstar to assume the operations of WPMT through local marketing or shared services agreements may be subject to regulatory hurdles that could delay completion of the FCC and Justice Department's review and approval process for the acquisition.) As such, Nexstar will be required to sell either WPMT or WHTM to a separate, unrelated company to address the ownership conflict. 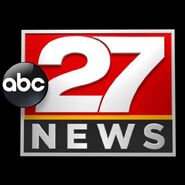