Deerfield Media
WHAM-TV is an ABC-affiliated television station licensed to Rochester, New York, United States. It broadcasts a high definition digital signal on virtual and VHF channel 13 from a transmitter on Pinnacle Hill on the border between Rochester and Brighton. The station is owned by Deerfield Media; the Sinclair Broadcast Group, which owns Fox affiliate WUHF (channel 31), operates WHAM-TV under a shared services agreement.[2] The two outlets share studios on West Henrietta Road (NY 15) in Henrietta (though the mailing address says Rochester). On cable, WHAM-TV can be seen on Charter Spectrum channel 13 in both standard and high definition.

[[File:Valley CW logo 2018.png|thumb|220x22 The station signed-on at 4 p.m. on September 15, 1962 as WOKR (for "We're OK Rochester"). It has always been an ABC affiliate, and is the only commercial station in the area that has never changed its affiliation. It originally operated from studios located on South Clinton Avenue in Rochester.

Guy Gannett sold its stations to the Sinclair Broadcast Group in 1998; as Sinclair already owned WUHF, it then spun off WOKR to the Ackerley Group, with the acquisition closing in April 1999. The station came under common ownership with WHAM radio (1180 AM) in June 2002 after the Ackerley Group merged with Clear Channel Communications, WHAM radio's owner. Speculation immediately started about whether WOKR would take on the WHAM-TV calls, which had been used on what is now WROC-TV from 1949 until 1956. On January 10, 2005 at 1:42 in the morning, channel 13 signed off-the-air for the last time as WOKR and returned to the air at 4:59 that same day as WHAM-TV. The WOKR call letters then moved to sister station WUCL in Remsen, New York (now Air 1 affiliate WARW; in 2015, when WARW dropped the calls, a radio station in Rochester picked up the WOKR calls and returned them to the market, only to drop them in 2017 when the station changed formats and became WRSB).

For many years, WOKR was one of three Rochester area stations offered on cable in the Ottawa–Gatineau and Eastern Ontario regions. The Rochester area stations were replaced with Detroit channels in September 2003 when the microwave relay system that provided these signals was discontinued. Until January 2009, WHAM-TV was also the ABC affiliate carried in several Central Ontario communities such as Belleville, Cobourg, and Lindsay. Buffalo ABC affiliate WKBW-TV replaced WHAM-TV in these communities.

On November 16, 2006, Clear Channel announced its intention to sell off all of its television stations after the company was bought by private equity firms. On April 20, 2007, the company entered into an agreement to sell its entire television stations group to Newport Television, a broadcasting holding company established by the private equity firm Providence Equity Partners. The sale separated WHAM-TV from WHAM radio (which remains owned by Clear Channel, now iHeartMedia); however, the WHAM-TV call sign has been retained, and the two stations have continued a news partnership.

WHAM-TV discontinued regular programming on its analog signal, over VHF channel 13, on June 12, 2009, the official date in which full-power television stations in the United States transitioned from analog to digital broadcasts under federal mandate. The station's digital signal relocated from its pre-transition UHF channel 59, which was among the high band UHF channels (52-69) that were removed from broadcasting use as a result of the transition, to its analog-era VHF channel 13.

On July 19, 2012, Newport Television announced the sale of 22 of its 27 stations to the Nexstar Broadcasting Group, Sinclair Broadcast Group and Cox Media Group. While most of WHAM-TV's New York State sisters were sold to Nexstar, a buyer for WHAM-TV was not announced until December 3, when Newport sold its non-license assets to Sinclair. The license was sold to Deerfield Media for $54 million. Sinclair cannot acquire the WHAM-TV license because of its continued ownership of WUHF (though it holds an option to do so); Nexstar could not purchase WHAM-TV because it already owned CBS affiliate WROC-TV. Rochester has only five full-power stations—not enough to legally permit a duopoly. WHAM-TV is also the only ABC affiliate owned by Newport Television that wasn't sold to Nexstar. With the announced sales in November of two additional stations to Nexstar and KMTR in Eugene, Oregon to Fisher Communications (which was later sold itself to Sinclair in May 2013), WHAM-TV was the last Newport Television station without a buyer. On January 30, 2013, the FCC granted approval of the transaction, and it was consummated two days later.

On December 31, 2013, WUHF terminated its eight-year SSA with WROC-TV, and the station was re-located to WHAM-TV's studios. On January 1, 2014, WUHF introduced two WHAM-TV-produced newscasts, Good Day Rochester and a 10 p.m. newscast, which were both previously seen on its CW-affiliated subchannel WHAM-DT2.

WHAM-DT2, branded as CW Rochester (formerly CW WHAM), is the CW-affiliated second digital subchannel of WHAM-TV, broadcasting in high definition on virtual and VHF channel 13.2. It is also available on Spectrum channel 16.

The station began as a cable-only WB affiliate in 1996 on Time Warner Cable channel 26. The station was created by Lynette Baker, Time Warner Cable's local programming manager, as a entertainment programming replacement for the independent channel WGRC channel 9, which was in the process of being relaunched as 24-hour news channel R News. Baker approached The WB to launch a cable only affiliate as all the broadcast licenses in the Rochester market were allocated. The network distribution staff headed by Ken Werner and Hal Protter agreed to the cable license. In December 2000, the station became a joint venture of Time Warner Cable and The WB, named Rochester Television Ventures, LLC; it used the fictional call sign "WRWB-TV". The venture kept Lynette Baker as the Director of Operations and hired Tish Robinson as general manager and Steve Arvan as general sales manager.

Rochester Television Ventures choose Jay Advertising Inc. as marketing and advertising agency of record for the channel in November 2000. At that time, the channel was expected to go live in January 2001. Tish Robinson was the channel's initial general manager. WRWB re-launched in December on channel 26, only to be moved to channel 16 in late December 2000.

Robinson planned for the channel to launch its own news programming in 2001, but revenue was below expectations, forcing its postponement until 2003. After the September 11 attacks, the channel replaced an airing of the martial arts movie Mortal Kombat with the family comedy Dennis the Menace. In May 2003, the channel began carrying Rochester Knighthawks National Lacrosse League games.

In mid-2004, Rochester Television Ventures added marketing and communications services to improve the channel's revenues and to fill the void of the loss of smaller advertising agencies. By this time, the cable channel had scrapped plans for newscasts and carried The Daily Buzz morning news show with local weather updates from TWC's R News.

On January 24, 2006, The WB and UPN announced that they would end broadcasting and merge. The new combined network would be called The CW. WRWB's CW affiliation was officially announced in early March. On November 13, 2006, WHAM-TV purchased WRWB-TV from Time Warner Cable. It renamed the service "CW WHAM" and began to simulcast on a new second digital subchannel of WHAM to offer over-the-air viewers access to CW programming. CW WHAM moved its operations and four of its staff from the downtown Rochester into WHAM-TV's facilities in Henrietta. 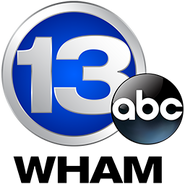