As an independent station[]

Originally designated as KBAY-TV, the construction permit for the station went through many owners from the 1950s onward without having been built. The KEMO-TV call letters were originally assigned to the Overmyer Communications Company, a broadcaster owned by Daniel H. Overmyer, who was also owner of the short-lived Overmyer Network (later called the United Network). Overmyer used his initials as the last three letters of the Toledo, Ohio station (WDHO-TV, now WNWO-TV), which signed on the air May 3, 1966. The KEMO-TV call letters were for son Edward Manning Overmyer. Channel 20 would sign on as KEMO-TV on April 1, 1968. It was jointly owned by the U.S. Communications Corporation station group of Philadelphia holding an 80% interest and the remaining 20% by Sherrill C. Corwin. Overmyer had previously sold 80% interest in the construction permits for WBMO-TV in Atlanta, WSCO-TV in Cincinnati, KEMO-TV in San Francisco, WECO-TV in Pittsburgh and KJDO-TV in Houston to AVC Corporation (U.S. Communications Corporation) on March 28, 1967, with FCC approval of their sale coming December 8, 1967. None of the stations were on the air at the time of the FCC approval of the sale. Beside KEMO-TV, U.S. Communications also operated WPHL-TV in Philadelphia, WATL in Atlanta, WXIX-TV in Cincinnati and WPGH-TV in Pittsburgh.

KEMO-TV was seemingly off the air more than it was on. At the time, the station showed conventional independent fare, along with The Adults Only Movie, a series of art films, not featuring sex or nudity—it was named "Adults Only" merely due to the films' lack of appeal to children. KEMO also offered Japanese live-action programs and cartoons dubbed into English including Speed Racer, Ultraman, 8 Man, Prince Planet, Johnny Cypher in Dimension Zero and The King Kong Show. With a mixture of locally produced and syndicated programming, KEMO-TV remained on the air for three years to the day, powering down its transmitter at midnight on March 31, 1971, to avoid paying the following month's PG&E electricity bill.

The former owner of KMPX-FM in San Francisco, Leon Crosby bought KEMO-TV later that year and it returned to the air on February 4, 1972. With an eclectic type of programming, KEMO featured shows such as Solesvida and Amapola Presents Show co-hosted by Amapola and Ness Aquino, to name a few. In 1973, Crosby also purchased WPGH-TV, the dark U.S. Communications station in Pittsburgh, bringing it back on the air January 14, 1974.

The station was then sold to FM radio pioneer James Gabbert (who previously owned popular music station KIOI (101.3 FM), who returned it to the air on October 6, 1980, as KTZO (which stood for Television 20, the Z being construed as a numeral 2), with a dramatically upgraded general entertainment format, featuring off-network drama shows, sitcoms, old movies, rejected CBS and NBC shows preempted by KPIX-TV (channel 5) and KRON-TV (channel 4), music videos, and religious shows. But while its independent competitors at that time, KTVU (channel 2, now a Fox owned-and-operated station), KICU-TV (channel 36) and KBHK (channel 44, now CW station KBCW) landed stronger syndicated programs, a majority of KTZO's programming lineup at most consisted of low-budget programs, which continued into its early years as KOFY. Most memorable were the station identification breaks featuring pets, usually dogs, of Bay Area viewers that would look on cue at a television screen showing the station's logo. In fact, these proved to be immensely popular—so much so that KTZO/KOFY would often work together with the Society for the Prevention of Cruelty to Animals by displaying pets that could be adopted, along with a phone number to call with the pet's name on screen. These IDs were retired in 1998, having aired alongside "official" WB-issued KOFY IDs for the first three years of the network's existence.

Other popular programming during the early and mid-1980s included the TV-20 Dance Party (originally a "Top 40" music format featuring local high schools, hosted by Bay Area DJ Tony Kilbert; later a 1950s "retro" style show hosted by Gabbert), and a Sunday late-night movie program. The Sunday program included studio segments at the beginning and commercial breaks of the movie, hosted by Gabbert and set in the fictional "Sleazy Arms Hotel" bar. Viewers were invited to join Gabbert on the set and for a time, enjoy a sponsor's product (a malt liquor).

On March 1, 1986, the station changed its call letters to KOFY-TV (pronounced "coffee"). The change occurred following Gabbert's purchase of radio station KOFY (1050 AM, now KTCT), which operated as a Spanish language station until Gabbert changed the format to 1950s–60s oldies rock during the 1980s and 1990s, later reverting to the Spanish language format. Gabbert sold KOFY radio in 1997 to Susquehanna Radio Corporation which changed the format from Spanish music to a sports talk format complementing its existing sports station, KNBR. At one point, Gabbert made Bay Area broadcasting history by televising a 3D movie that required special glasses, Gorilla at Large. KOFY-TV continued to run a general entertainment format, and added more cartoons in the late 1980s. Beginning in September 1987, the station filled the 7 to 11 p.m. timeslot with drama series such as Perry Mason, Cannon, Lou Grant and Combat!

From the mid-1980s to the early 1990s, KOFY also featured an in-studio, live kids cartoon show called Cartoon Classics. Hosted by Maestro Dick Bright, the show offered such cartoons as Mighty Mouse, Bugs Bunny, Tom and Jerry and Popeye. The show frequently featured local magician Magic Mike (played by Michael Stroud) performing for the studio children. Finally the live-action in-studio segment was scrapped and the show just showed the cartoons straight. Afternoon cartoon shows such as these eventually became a thing of the past as cable television was able to feature round-the-clock cartoons aimed at younger viewers.

KOFY added more sitcoms in the early 1990s. KOFY also broadcast network daytime game shows and Saturday morning cartoons not carried by KRON and KPIX such as NBC game shows Blockbusters, Classic Concentration and the daytime version of Win, Lose or Draw; the NBC cartoon series Alvin and the Chipmunks; the CBS game show The Price Is Right; the CBS cartoon series The Get Along Gang and Saturday Supercade; and for a few weeks during the Oliver North Iran-Contra hearings, Wordplay. The CBS game show Tattletales was picked up for the KEMO schedule during the mid-1970s among its foreign language-heavy programming when KPIX did not carry its CBS feed.

On Christmas Eve, Gabbert would preempt normal programming during the entire evening and broadcast its own version of the Yule Log, a concept borrowed from WPIX in New York City (which incidentally, would also later affiliate with The WB). In the late 1980s through the mid-1990s, the station ran an "oldies dance party" hosted by James Gabbert, and emceed by Sean King.

In mid-January 1994, the stations began airing the Action Pack programming block with TekWar TV movie. The ratings jumped 350% over its November ratings.

As a WB affiliate[]

The station became the Bay Area's WB affiliate, when the network launched on January 11, 1995. KOFY eventually began to upgrade its programming inventory from low-budget programming to more higher-profile syndicated programs to compete with other stations in the market and channel 20's own growth as a WB affiliate.

In 1996, KOFY-TV employees attempted to organize as a collective bargaining unit under the labor union for broadcast employees, NABET. Gabbert and various KOFY-TV managers interfered with the organizing effort, resulting in a case before the National Labor Relations Board. The NLRB ultimately ruled against the station.

In 1998, Gabbert sold KOFY for $170 million to minority-owned Granite Broadcasting, who changed the call sign to KBWB on September 14, 1998, to reflect its network affiliation. In 1999, KBWB's operations were merged with those of then-sister station KNTV (channel 11) in San Jose, who contributed a 10:00 p.m. newscast, plus simulcasts of its morning newscast, and, in return, received a temporary WB affiliation for 18 months after KNTV voluntarily dropped its ABC affiliation at the behest of network-owned KGO-TV (channel 7; KGO served most of the Bay Area, while KNTV served as the ABC affiliate for the South Bay). This arrangement ended in April 2002 after KNTV, by then the NBC affiliate for the San Francisco market, was sold to that network.

In September 2005, Granite announced the sale of KBWB and sister station WDWB (now WMYD) in Detroit to AM Media Holdings, Inc. (a unit of Acon Investments and several key Granite shareholders) for a price rated, on KBWB's end, to around $83 million. The low price, compared to the more than double amount Granite had purchased the station for, came out of Granite wanting to cut down its debt load while wanting to keep control of the stations. On February 15, 2006, Granite announced the restructuring of the sale considering the changing conditions of the station and that AM Media Holdings may not own channel 20.

In May 2006, Granite announced that it had sold KBWB, along with WMYD, to DS Audible, a new group affiliated with Canyon Capital Advisors, D.B. Zwirn & Co., Fortress Investment Group and Ramius Capital Group, among others, for $150 million cash (DS Audible San Francisco, LLC, one of the two groups created by the investment groups, would have acquired KBWB for $65.75 million). The previous agreement to sell the two stations to AM Media was withdrawn. On July 18, 2006, this sale also fell apart; Granite then announced it would try to find another company willing to buy KBWB. Granite filed for Chapter 11 bankruptcy reorganization on December 11, 2006, after missing an interest payment on its debt of more than $400 million.

On January 24, 2006, the Warner Bros. unit of Time Warner and CBS Corporation announced that the two companies would shut down The WB and UPN and combine the networks' respective programming to create a new "fifth" network called The CW. On the day of the announcement, the network signed a ten-year affiliation deal with 11 of CBS Corporation's 15 UPN stations, including KBHK (which subsequently changed its calls to KBCW). Network representatives were on record as preferring the "strongest" WB and UPN affiliates in terms of viewership, and KBHK had been well ahead of KBWB in the ratings for virtually all of UPN's run. Another new network that would launch the same month as The CW, MyNetworkTV (which debuted on September 5), ended up affiliating with former NBC affiliate turned independent KRON-TV.

Soon after the CW announcement, the station rebranded to "TV20" (following the lead of Detroit's future MyNetworkTV affiliate and sister station WMYD, formerly WDWB, which also branded as "TV20"). KBWB reverted to being an independent station on September 18, 2006 (one of three in the San Francisco market, alongside KICU and KFTY channel 50, now KEMO-TV), under the new branding as Your TV20 (a parallel of sorts to "My TV20", the branding of sister station WMYD, which affiliated with MyNetworkTV). In March 2008, channel 20 revived the dog station IDs that were previously used under James Gabbert's ownership of the station, this time featuring dogs sitting on a couch in front of several San Francisco backdrops.

KBWB then became an alternate ABC affiliate, carrying programs from that network during instances where KGO-TV pre-empts regularly scheduled network programming for local breaking news coverage. On October 8, 2008, at 10:00 p.m., KBWB reverted to its previous KOFY-TV call letters, commemorating the change with a 10-minute documentary about former owner James Gabbert and the station's history.

In the Federal Communications Commission (FCC)'s incentive auction, KOFY-TV sold its spectrum for $88,357,227 and indicated that it would enter into a post-auction channel sharing agreement. On October 30, 2017, the station entered into a channel sharing agreement with KCNZ-CD (channel 28); concurrently, Granite Broadcasting agreed to sell the KOFY-TV license to Stryker Media 2, a sister company to KCNZ-CD owner Poquito Mas Communications, for $6 million; Stryker Media 2 is a subsidiary of CNZ Communications. The sale was completed on October 15, 2018. 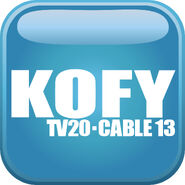